Now, I’m not going to lie. I had seen this for a while and hadn’t picked it up because of the ‘Camo’ name. (All my experiences of Camo were from my small town high school and I wasn’t ready to revisit that). But I finally caved, and bought the whole collection, as the glitters included really intrigued me. And I mean, it’s Sinful Colors so the whole thing was only $16 to pick up.

Now this collection includes 4 regular polishes, and then 4 of what Sinful Colors calls ‘Camo Glitters’ or toppers. These are all clear bases with tons of different shaped glitters and shapes inside.

Down below I have bottle shots and swatches on a nail wheel (someday I’ll work up to actual nail swatches-maybe with a 4 piece collection first) of all the colors, along with small reviews.

The first is a bright teal cream with a VERY subtle teal shimmer throughout. This shade is called ‘Rise & Shine’. In the bottle the shimmer is very faint, and it looks almost like a teal cream. The shimmer is a little more apparent on the nail, especially in the sunlight. Now, I have worn this one, and I’m already in love. First, it’s opaque in ONE COAT. That’s right, one coat. That is with careful application. I did notice some streaking and patches on my left hand, where I paint like a derp. I also noticed my ridges, so I did two coats to smooth everything out. But it’s a beautiful color, and a smooth formula.

Next is ‘Beaches And Cream’. This is a light more yellowy-cream color. If you look in the bottle it has shimmer for a very subtle red flash. However, once swatched on the wheel, the flash isn’t there. This one was definitely streaky on the first coat. It’s fully opaque in 2-3 coats, with a thicker 2nd coat.

‘Moss Have’ is a metallic dusty olive green color with a silvery base. This one is opaque in two coats, but definitely shows brush strokes. It’s possible to sponge on a third coat to make it fully even.

‘Gold N’ Roses’ is a sheer rose gold shade. It’s a rose gold base with silver shimmers and then clear? little flakes throughout that give it a little reflective dimension. As I said, it’s sheer, with 3 coats here. 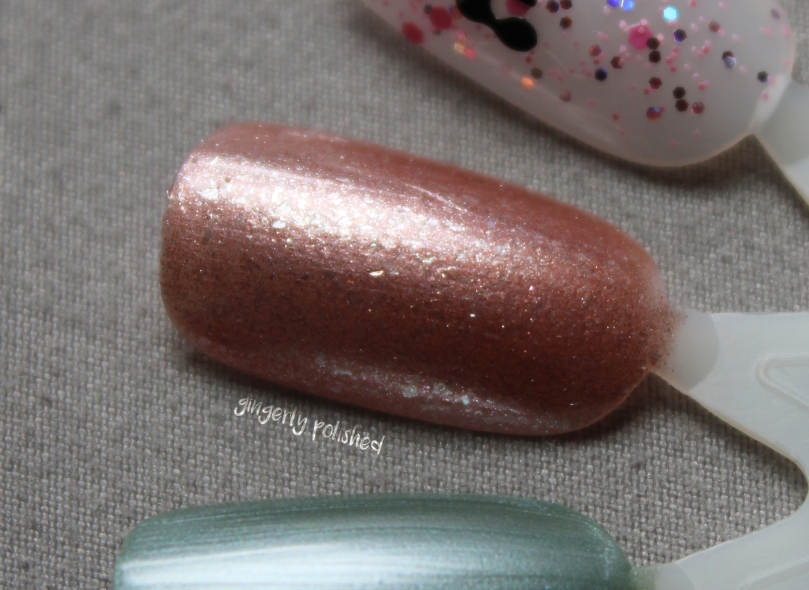 Now onto the toppers.

‘Army Brat’ is the first of the new ‘Camo Glitters’. This one is a clear jelly base with holographic circle glitters, pink hexagon glitters, matte pink micropieces, and these weird matte black shapes? I don’t even know what to call them? I think they’re supposed to add to the camo idea? Either way there’s only one on the swatch because these suckers all sink to the bottom so I had to do quite a bit of fishing for this one. Pretty much all of the shades have a shape in the glitter that you really have to fish for, and the difficulty of getting them on your nail ranges from little effort to dear god this is staying in the bottle until the end of time. This one was only moderately frustrating. Other than that, the rest of the shapes spread evenly. This was two coats. This one also has the smallest glitters, so it looks less dense than the others. Next is ‘Good Company’. This one has small holographic shimmers, two sizes of matte white hexagons, smaller black hexagons, and then larger matte lime green hexagons. This was two coats so everything spreads evenly. The lime green hexagons need to be fished for a little, but not a crazy amount. I was able to get a couple on each nail I put this on. 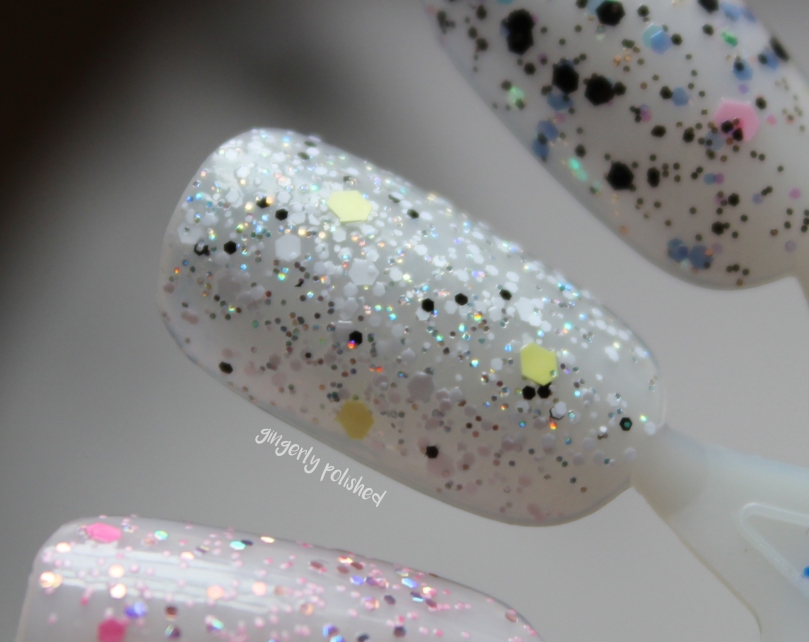 ‘Under Cover’ has holographic glitters, two sizes of black hexagons, translucent blue hexagons, and larger pink hexagons. Those shapes spread evenly  in two coats and top a polish well. But do you see that weird little white shape in the bottle shot? Yeah, it’s not on the shot because I could not get it out. I fished around, first with the brush, then with a longer brush, for about 5 minutes trying in a vain attempt to get a piece of that white shape. And you’re right, I didn’t, and I never will. The day I snag one of these pieces accidentally will be the day you hear a cry of delight around the world. Besides that, this is 2 coats, and the rest of the shapes spread evenly. 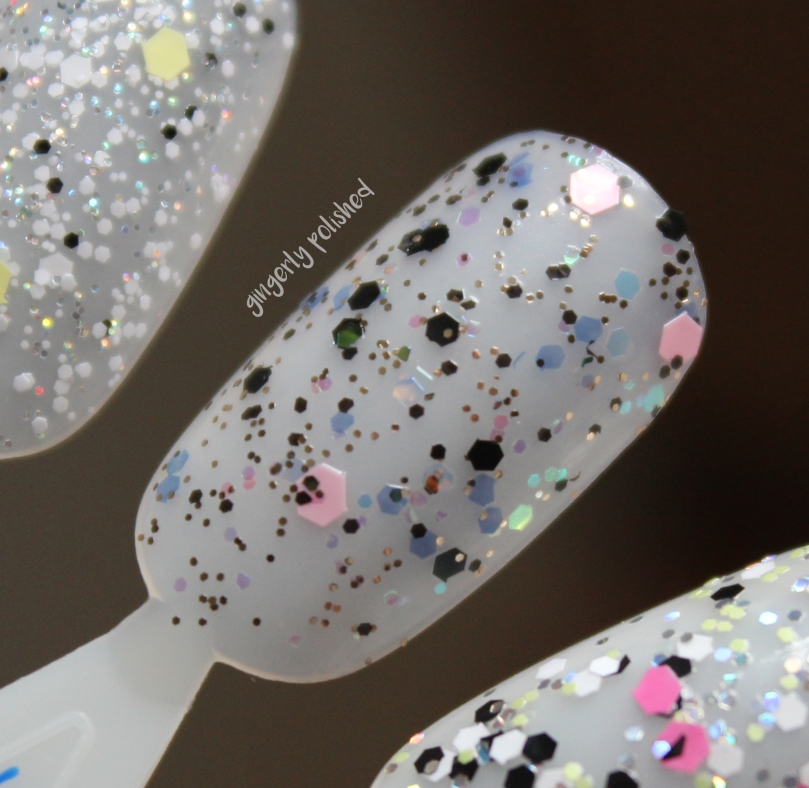 Lastly is ‘Cute Cadet’. This has circle holographics, matte lime green hexagons, medium black and white hexagons, and large matte pink hexagons. This one also has the larger black shapes like the first topper had, but again, it was frustrating to get them out. I didn’t even notice the shapes in this one until later, as they’re so hidden on the bottom.

Overall: I loved the cream shades, ‘Rise & Shine’ and ‘Beaches and Cream’. I do really like the toppers, even with their frustrations. They can switch up a normal manicure, and go well over cream shades. I’ll just pretend those larger shapes aren’t even in there. I do like these colors, as they’re good additions to my collection.

Final Note: Skip ‘Gold N’ Roses’ and pick up ‘Hush Money’ from the permanent line instead.

8 thoughts on “Review/Swatches: Sinful Colors ‘Stand Down to Stand Out’ FULL COLLECTION”