Heyooooo we have a comparison post again! I know these dropped out last year, and like I’ve mentioned many times before I wanted to get back into them this year. A major goal for 2020 is to destash and declutter my collection, so these posts definitely help me accomplish that.

So today, we’re looking at the OPI Hello Kitty collection for Winter 2019. I’m working on holiday collections and working my way back to fall from 2019 – never too late for some comparisons!

Obviously I only pick shades that have actual close comparisons to look at and swatch – there were a few in this collection that I had nothing remotely close to, so if you don’t see them in this post, that’s why.

This is the first post I’ve included swatch sticks that expand out the color comparisons for certain polishes! I’m almost too proud of these, but they’re so helpful as well. Some of them may not be close to being dupes, but you’ll be able to see the sticks and see “oh it’s more pink-toned than this one, but deeper than this one”. It just helps you place the color within a bigger collection.

And then from those swatch sticks, I pulled up to the 3 closest shades to swatch on the nails and compare even more closely. LOOK AT ALL THE COMPARISONS, SHE’S WILD! All in all, I’m just trying to help make a guide, and help you give allllll of the information before buying. So I hope you enjoy!

Obviously I’m playing a little bit of catch up here – as spring collections release, I’ll be putting those comparisons at a higher priority, and then adding in previous holiday and fall comparison posts sprinkled in between. You can still find these shades and purchase them, so I figure they’ll still be helpful to have up!

Alright, we got a lot of polishes to look through, so let’s get into it already, shall we?

We’re starting right out with a bang, with a good ol’ smack on the money dupe. This was the dupe I heard the most about when the collection dropped, so I knew I would be destashing one of these. Apparently, OPI and Zoya had the same idea.

So OPI ‘Glitter to My Heart’ is an exact dupe of Zoya’s ‘Dallas’, released in their holiday Twinkling collection. I know ‘Glitter to My Heart’ looks denser here on the middle finger, but I ended up swiping over that nail a little bit more – you get literally the same effect from both. You don’t need both. 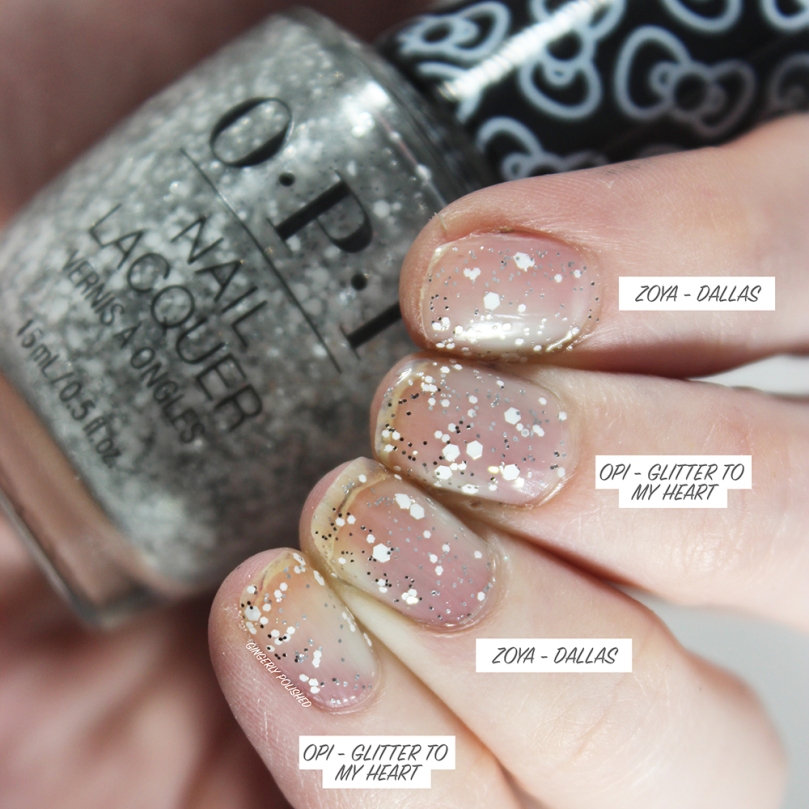 Now for the most anticipated shade of this collection! OPI re-released ‘Let’s Be Friends’, the most popular shade from the 2016 Hello Kitty collection. Here it is with my other lighter, white-based shades.

And the nail swatches!

Obviously everyone wanted to know how the new one compared to the old one and well… They’re not exactly the same. As you can see, the 2016 release is a touch more peachy than the new one. This year’s is brighter and more cool-toned. They both are streaky and still require 3 coats – I know everyone was hoping for a little better formula, but I wasn’t fully impressed.

However, I think we did find a dupe – and it’s not the 2016 version. As you can see Orly’s ‘Power Pastel’ from their Spring 2018 collection. These babies are close enough, that you don’t need both. (And honestly, the Orly one has a better formula – scandalous to say. An easy, creamy 2 coats with the wider brush).

Next up, our frosty pink, ‘A Hush of Blush’. As you can see this one was a little more unique. OPI’s ‘Color That Keeps on Giving’ is a touch lighter and more peachy, and Essie’s ‘Polarizing’ is deeper with a stronger green shimmer.

Next up, we have ‘Many Celebrations to Come’. It’s a little lighter than most golds, and a little warmer than other champagne shades.

I ended up pulling only one other shade to nail swatch against it, Orly’s ‘Gilded Glow’ – it’s from the Arctic Frost collection, not named that, my bad there. But as you can see, though they’re the same base shade, ‘Gilded Glow’ is much more shimmery and glitter than ‘Many Celebrations to Go’. 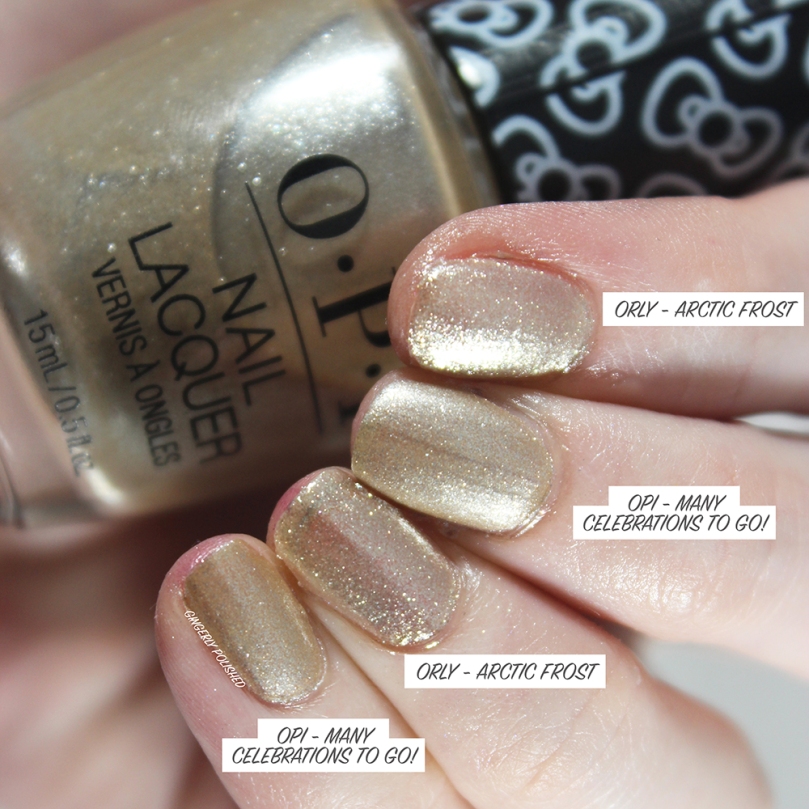 Though they’re a touch different, I don’t think I’ll keep both. Depends on what look you’re looking for!

Now we’re looking at ‘Isn’t She Iconic’. As you can see, it’s deeper and smokier than most of the silvers I had in my collection. Zoya’s ‘Jett’ is close in base color, but of course, has those flakies in it that differentiates it.

(This is basically a lovely skittle mani here). No dupes here! It’s like the love child of OPI’s ‘Ornament to Be Together’ and China Glaze’s ‘I Still Beleaf’. I was surprised at how unique it ended up being in the collection!

Now onto alllllll the REDS. There were 2 released in this collection, so I chose to show them both so you can see how they differ.

Also no secret that OPI releases a LOT of reds, so there’s lots to look at here. (These are the photos that accompany the ‘I swear they’re all different’ memes). 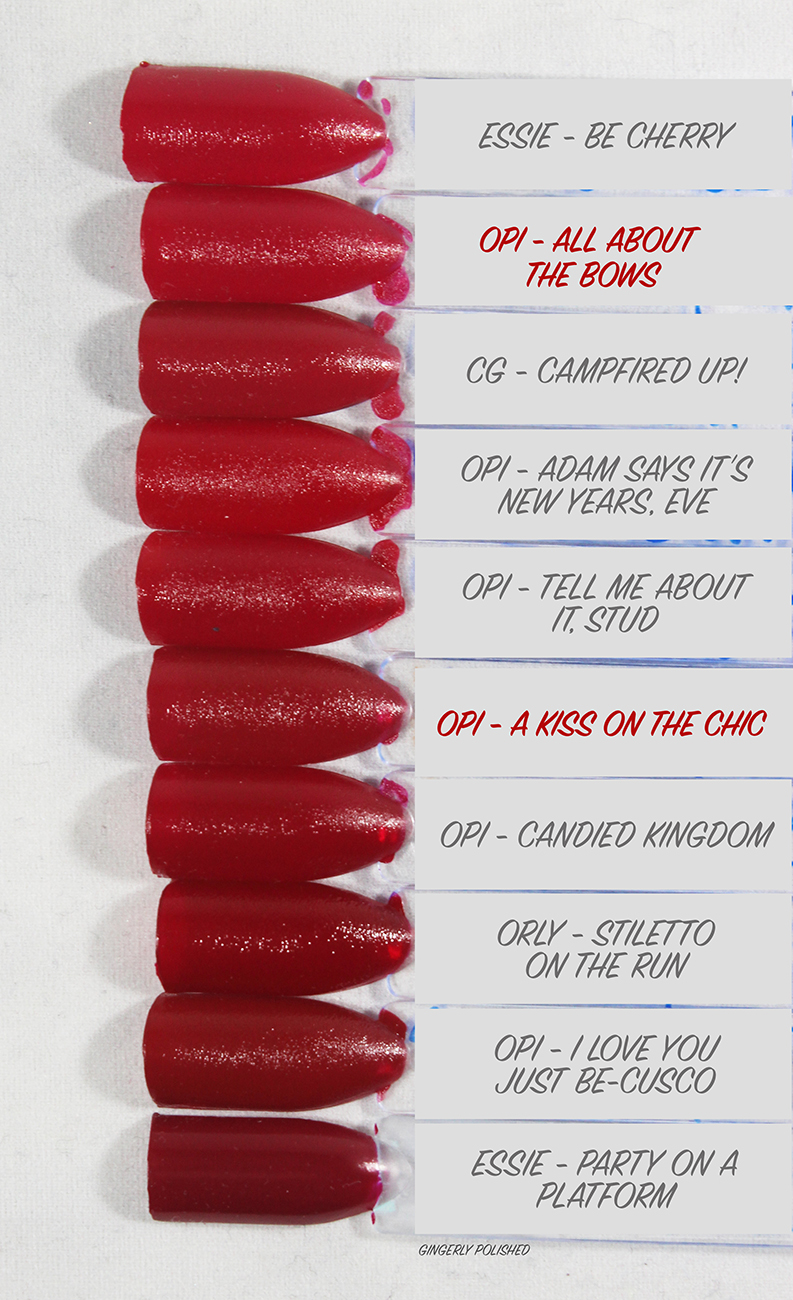 ‘Candied Kingdom’ and ‘Kiss on the Chic’ are way too similar for me to keep both though. Here you can see more of the differences between ‘I Love You Just Be-Cusco’ and ‘Campfired Up!’ 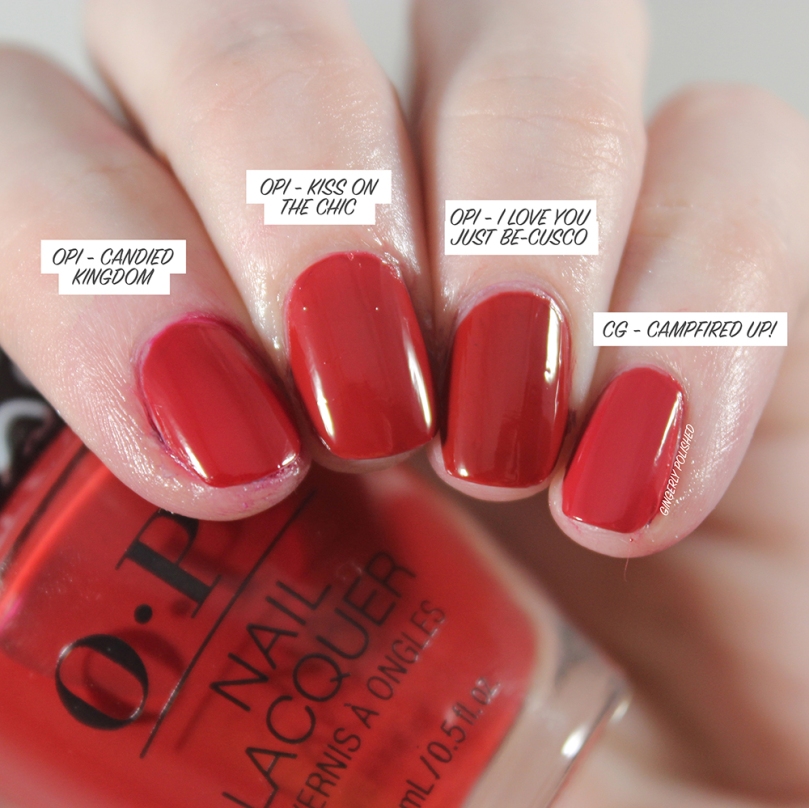 And then our other red, ‘All About the Bows’, which is lighter and more cherry red. With that, it’s so fitting that we have a dupe in Essie’s ‘Be Cherry’ from their Winter 2017 collection. This one has been left on my nails for a couple days and I keep staring at them, and they’re the same.

‘Tell Me About it Stud’ is deeper, and ‘Stiletto on the Run’ is even deeper.

But I’ll be letting go of ‘Be Cherry’ – they both have great formulas, but it’s Essie’s old skinnier brush, and I like the OPI one better. 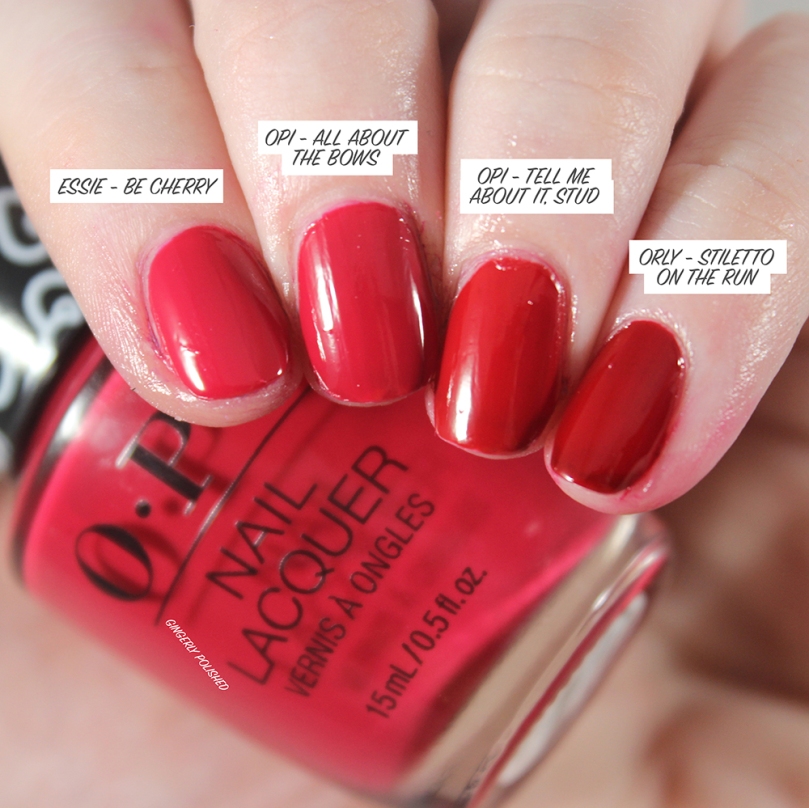 Now into the blues! I was surprised I didn’t have more shades like ‘My Favorite Gal Pal’. It’s deeper than most blues I have, but also still “blue” than my navy shades.

On the nails you can see the differences even more. ‘On Your Misletoes’ is more gray-toned, while ‘You Don’t Know Jacket’ and ‘Booties on Broadway’ are much deeper. 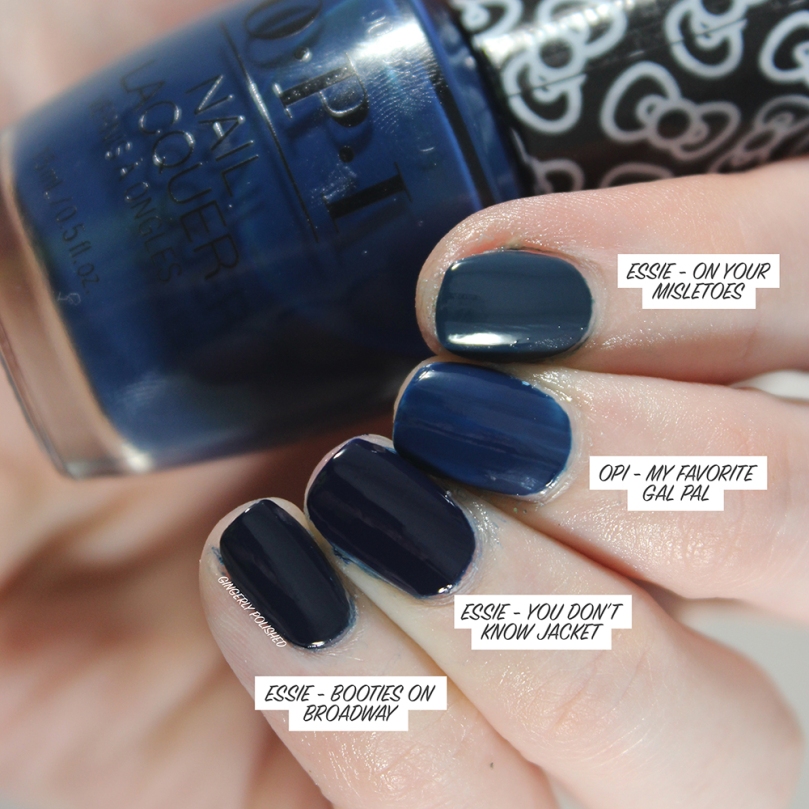 Last but certainly not least, we have the purple, ‘Hello Pretty’. Apparently purple is a less popular shade than I thought, as I didn’t have much to compare it to! It’s a much lighter and more cool-toned shade than any other purple I had in my collection. 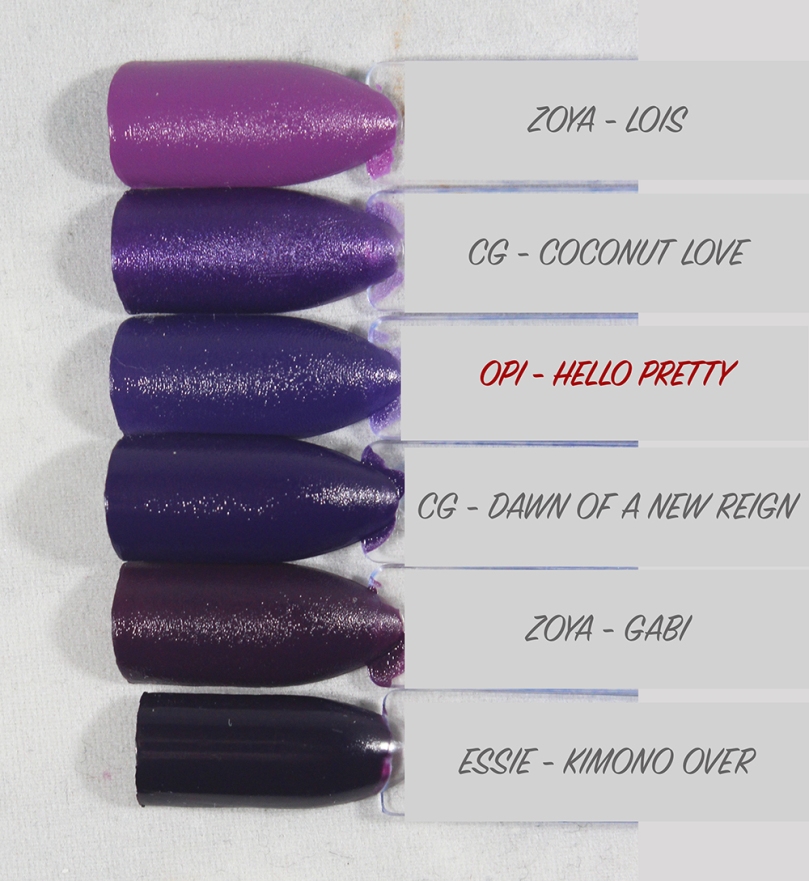 I only compared it to one other shade on the nails that was close enough. China Glaze’s ‘Dawn of a New Reign’ is deeper and a touch more warm-toned.

And there are the comparisons! As you can see, we had a few dupes, but also a few more unique shades than I thought we would! Though this did take a little longer and more work, I enjoyed doing it so well and seeing where these new shades fell within my own collection!

I’ll definitely be continuing these posts as they’re so helpful to me, and hopefully to you as well!