It’s a rainy, lazy day over here – I say that like all the other days haven’t been lazy as well. We gotta accept the lazy when it comes, and hold onto the productivity when it comes as well, so we’re finally getting this post up!

There’s been lots of interesting nail polish releases happening and I just have all of this time to shop online right now SO don’t worry you’ll be getting lots of posts and swatches on the way. I’m here to show you the polishes and enable along the way!

So first up let’s look at this wash of white on the feed. This is the new China Glaze ‘White Hot’ collection for Summer 2020. It features 6 white shades in all different finishes and formulas. I grabbed these from my main source for all polishes, polishpick.com. (Forever my fav place for ordering polish, with the best prices. They fully have a hold on me at this point).

This collection is the epitome of “they’re all different, I swear!” and I can only imagine my mother’s face if I showed her a picture of these 6 polishes I just bought. (She’s supportive but doesn’t fully understand, and that’s okay. She also thinks I have way too many nail polishes and you know, she’s correct there. Happy Mother’s Day, Mom).

BUT THEY ARE DIFFERENT, OKAY. We’ve got some different finishes and formulas here and overall, I SWEAR they’re all different. You might not like ’em all, or any of them, but that’s how it works with all polishes and it’s all about personal taste! Alright enough yammering, let’s get on into the swatches where I’ll show you how they’re different.

Up first we’re starting with the plain white cream shade called ‘Summer Moon’. It’s just a straight up white cream – comparing it to other full whites I have, I don’t notice any tints or undertones to it. A good ol’ classic white cream shade.

It had a streaky 1st coat, which I was fully expecting with a white cream. It can be pretty well opaque with a 2nd thicker coat, but I did have to do a 3rd to cover up some last streaks. Overall, not the best white cream I’ve ever used – I prefer ones that can cover in 2 coats for using under swatches. I’ll keep this one and eventually use it up just because I go through a lot of white creams, but I think it can be skipped for other white creams.

Next up we have ‘Off White, On Point’ which looks exactly the same in the bottle as Summer Moon above. But instead of a full white cream, it’s a squishy white crelly.

Now I will say that this polish had a bit of a learning curve for me, and this photo was actually the 2nd attempt to put it on. This is 3 coats built up, and it will be more of a sheer look. The mistake I made with the first time putting it on was trying to do too thick of coats on and trying to build it up too much. Too thick of coats can cause patches and the polish to pull so I recommend thinner coats and floating it onto the nail.

Over-manipulating it can also give you some more patches as well, so float it onto the nail and leave it, and you’ll have a good time. 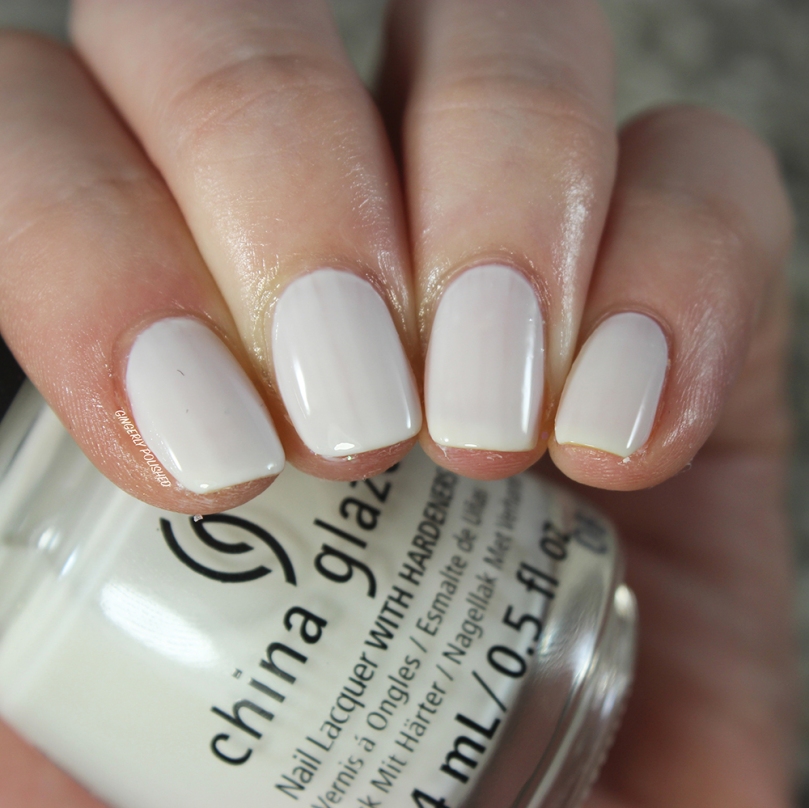 Pearl shades are apparently the thing of the season, and that’s right we got another one in this collection as well! (If you missed it, OPI had a whole pearl collection that I reviewed here). This is ‘Pearl Talk’ and it’s a super bright white pearl shade. (Also peep that bandaid on my finger, I managed to cut my finger opening up some frosting).

I had some ridges and nail line peeking through after a 1st coat, but it’s pretty well opaque in 2 coats. I had just a few patches, so I topped it with a 3rd to make it fully opaque.

As always with all pearl shades, you are going to have some brushstrokes. You can try to paint as straight as possible, or if you want it fully smooth, you can sponge on the last coat. Which I’ve shown below.

Annnd with a final coat sponged on! I think my new favorite past time is sponging on pearl shades. It’s made me change my tune around them and suddenly I love them. I mean, look at how good it looks??? That shimmer, so beautiful. 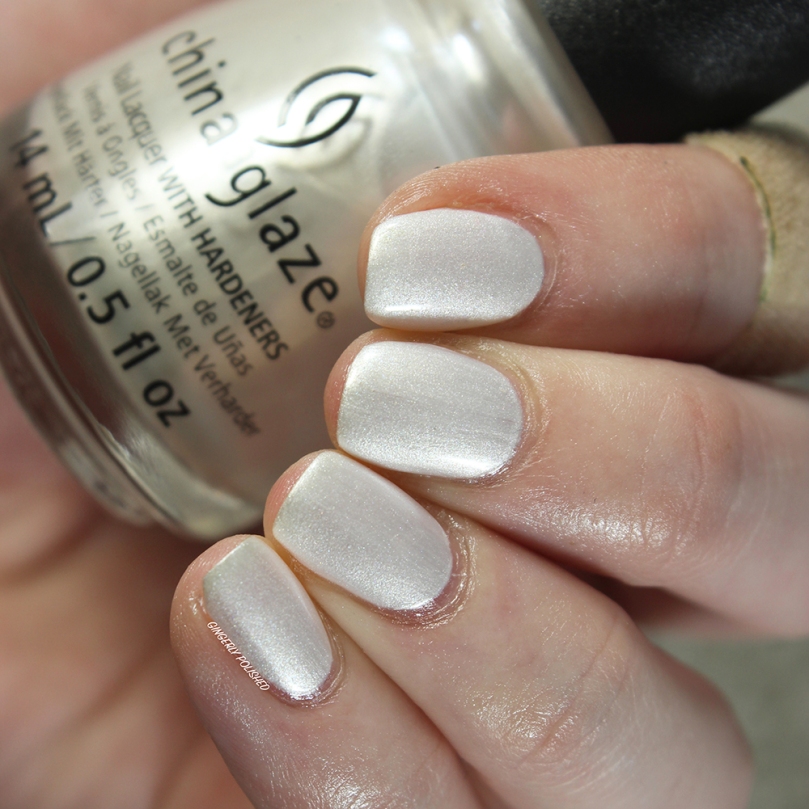 Next up we have our two white bases with different colored shimmers.

First is ‘Hey Chardonnay Hey’. This is a white crelly base with golden shimmer all throughout. It had a sheer 1st coat, but it was smooth so it can be a 1 coat sheer look. It starts to build up with a 2nd coat. I added a 3rd coat and there was still some faint nail line, so it’ll depend on your preferences if you like it.

It’s definitely an interesting base where it’s not quite a cream, and feels super shimmery and not opaque overall. Definitely different than I expected from the bottle. It’s that base you know the one, where it feels I don’t want to say chunky? But not quite smooth. It’s very interesting.

And listen, like I said I’m obsessed with sponging things right now (I accidentally bought like 6 packs of sponges online, okay), so I had to try out sponging the last coat on for this polish. And Woweeeeee, I’m so glad I did because it comes ALIVE.

It builds up that golden shimmer and the polish just GLOWS on the nails. 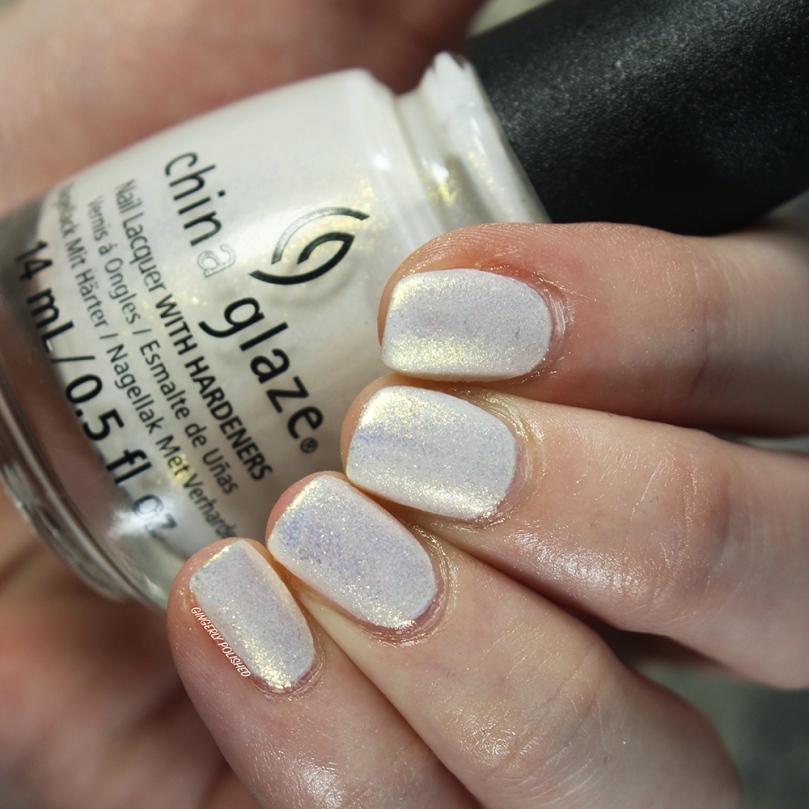 I’m obsessed and oop this is the only way I can wear this polish now. Sponging polish on is an addiction 😂

The other white crelly base with strong shimmer is ‘Sauvignon & On’. This is the same sort of white crelly base with bright red-orange shimmer. Just like the other it was sheer but smooth on the 1st coat. It starts building up well in 2 coats and is pretty well opaque in 3 coats. I know in my bright lights it definitely looks more uneven. I noticed that the shimmery flash in it helps distract from the patches and almost “cover them up” a little. 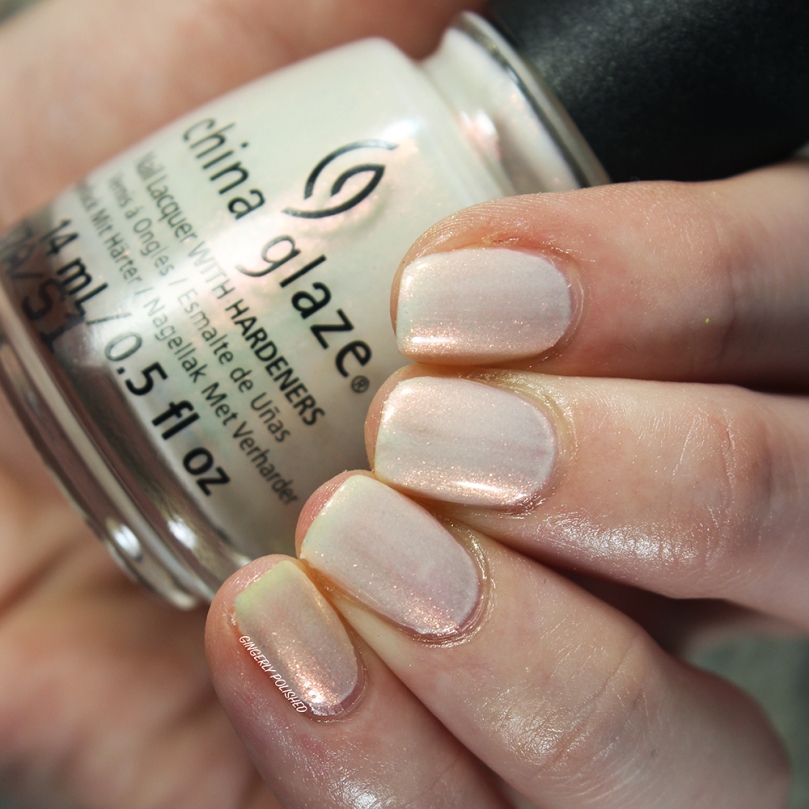 I can’t explain why I didn’t sponge this one as well, but I’m sure it would build it up and smooth it like the others as well. 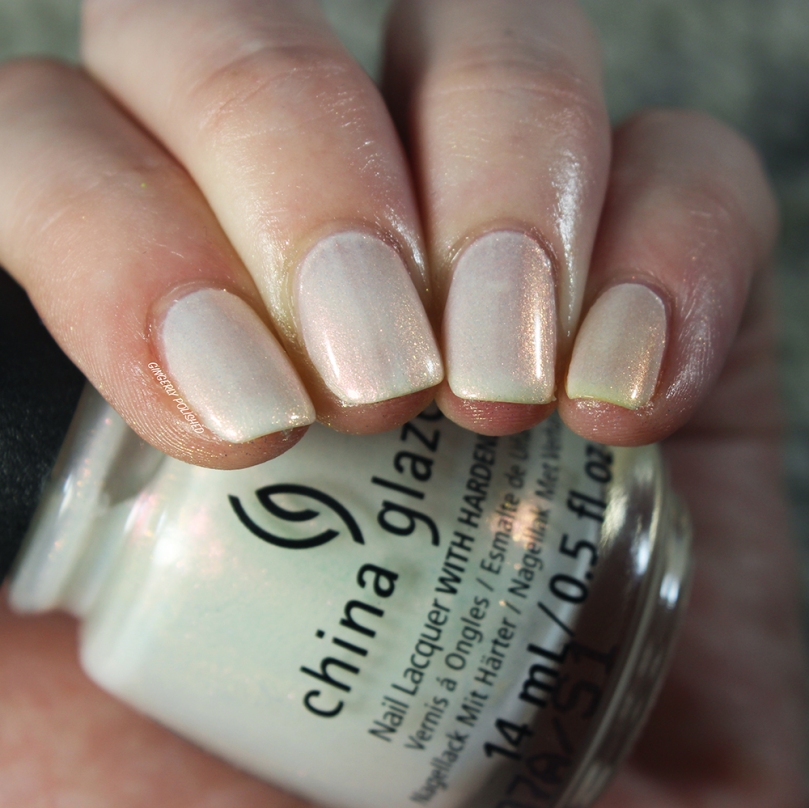 Last up we have ‘Spritzer Sister’. Now I’ll be honest, in the bottle it looks like a lovely milky white base with iridescent flakes. But it’s actually a very sheer base, and overall will be used as a topper. I still showed it as 3 coats built up here to show the effect. It’s still a cool look if you wanted a sheer nail look.

Not my preference or favorite, but someone could like it. 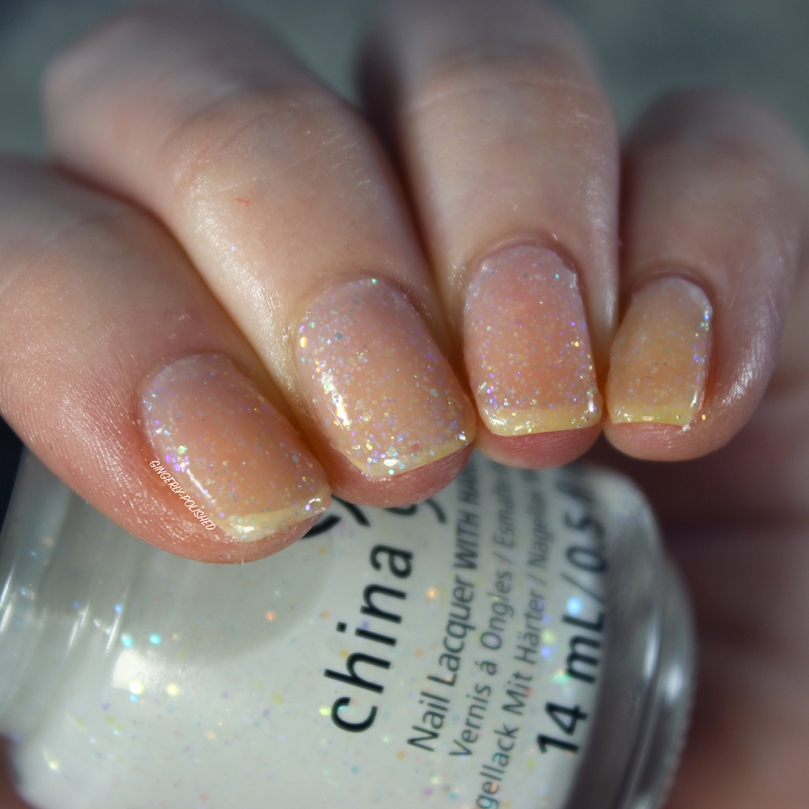 And then of course, I wanted to show it as topper (and the bandaid returns for these swatches). Here’s 1 coat over ‘Summer Moon’. I think this would be such a fun look in the winter, for a nice snowy nail look! 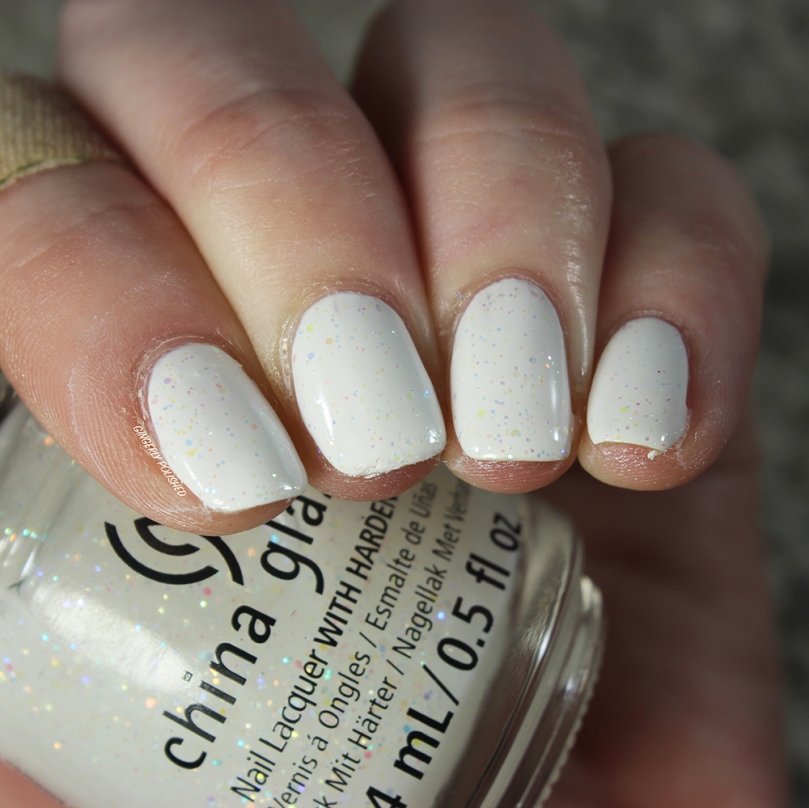 And then where it really shines is over black, or a darker base in general. Those iridescent flakes just pop while on the nail, and this is definitely my favorite way to wear this polish.

I’m just letting it speak for itself here, just look at her. 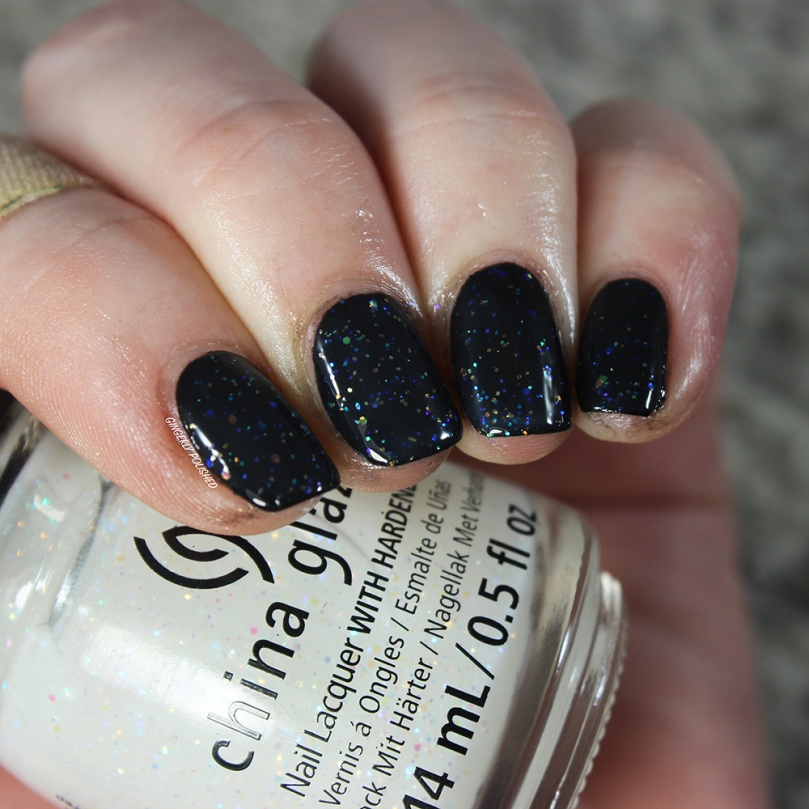 And that’s the White Hot collection! Definitely not at all what I was expecting from the promo pictures and bottles, and it’s one where swatches are necessary to show what the polishes really look like.

‘Off White, On Point’ was a surprise favorite for me, as well as ‘Hey Chardonnay Hey’. ‘Spritzer Sister’ is just so pretty as a topper and I can see using it over more polishes in the future!

As always, it’ll depend on your polish preferences overall!