You know, I meant to get this up earlier, but catching up on 5 seasons of Game of Thrones, and then just plain going to bed early has got me all off on my swatching schedule. (That’s right I’m way behind on Game of Thrones, and working on it, if you spoil anything I will KICK YOU).

Anyways, let’s talk about this “cheeky” little duo that releases today, shall we?

Damn, the quickest intro I’ve ever had into a post. Don’t worry, I’ll be more chatty in literally every other post.

This is the ‘Chic & Cheeky’ duo from Sista Chic Lacquer.  The owner, Debbi, says she was inspired to create this collection after another swatcher described a polish as “cheeky”. They’re two fun pinks, and available now on the Sista Chic website. Just like all of her other polishes, a portion of the money from these polishes will be donated to Project Rescue, an organization helping those rescued from sex trafficking.

As before, these were sent to me for my honest review, but I’ll always give my honest thoughts, all that fun and jazz. Now let’s get into the fun stuff.

‘Chic’ is a light nude pink shade with blue shimmer.

This was a little uneven on the 1st coat, especially with my ridgey nails, so it will need a 2nd. But I was able to easily get it opaque on the 2nd coat, and it was a smooth beautiful formula to work with. So “chic” on the nails as well, and perfect for a more modest setting.

The blue flash is lost when it’s on the nails however, so I do wish that it was more apparent. But the color and formula are beautiful even without it. 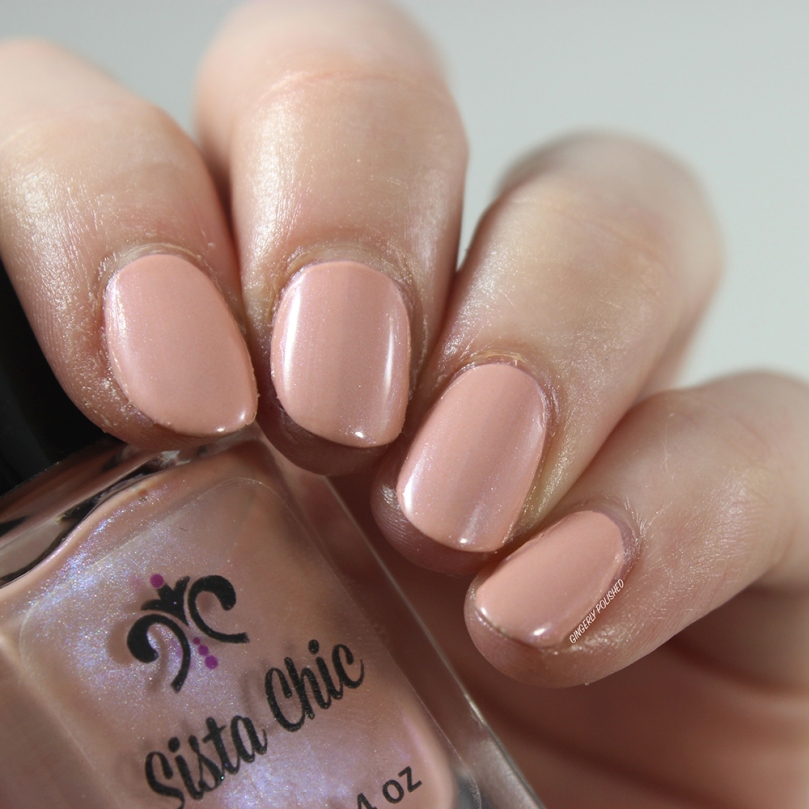 And of course, we have “Cheeky”. This is a bubblegum pink shade with tons of silver shimmer and big blue hexagons and iridescent hexagons.

The base on this was another smooth formula, and easily opaque in 2 coats. It’s smooth and self leveling and I love the silver shimmer.

I did have to place the pieces and pick them up more to spread them evenly on the nails, as they didn’t pick up as much with just sticking the brush into the bottle. My technique was to scoop up the glitters that stuck in the neck of the bottle when I wiped the brush off, and then place them on the nails. They laid flat on the nails, and weren’t chunky or peeling off.

Obviously with bigger pieces like this, they won’t pick up as easily, but it wasn’t too difficult overall to fish and place them. And it made for such a fun look that I didn’t mind fishing a little.

And that’s it! A nice quick post, as it’s just a little duo to talk about! I do especially love ‘Cheeky’ as it’s a fun little mani with a unique look. Definitely unique in my collection. ‘Chic’ might be a little less unique color-wise, but it’s such a beautiful formula and a nice staple nude.

As I said, these are now available on the Sista Chic website!

It’s crazy that summer collections are already getting released! (That means I should hurry up and finish all my spring collection posts, huh? I told you my schedule is behind. But they’re on their way, I promise).